Two Key Points About Diabetes and Insulin Resistance You Need To Be Aware Of. 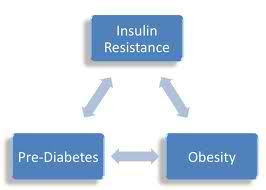 Type 2 diabetes is estimated to afflict approximately 24 million people in the U.S. It is diagnosed by a fasting glucose level of 126 mg/dL or greater, or a “glycosylated hemoglobin” (HA1C) test of 6.5 or greater. It is the number one new cause of both blindness and kidney failure in the U.S. and 60- 70% of diabetes have some form of peripheral neuropathy, with most of these people having sexual dysfunction.

Simply put, diabetes is when the glucose (which is the main energy source for the cells of the body (all 100 trillion of them), and the only energy source for the cells of the brain), can’t get into the cells! You see our bodies need a hormone called “Insulin” to get the glucose into the cells. Insulin comes from an organ called the pancreas, but do you know the four other organs/ glands that control your blood sugar? its more than just the Pancreas.

What About Insulin Resistance?

Why would insulin stop being able to get glucose into the cells? Certain lifestyles/ dietary habits can cause our cells to become “resistant” to the insulin. It’s as if the cells of the body “stop listening” to insulin, causing the glucose to build up in the blood, where not only is it useless as far as providing energy, it gets turned into FAT! This is why a person’s triglyceride and cholesterol levels will increase with diabetes.

But what are those lifestyle/ dietary habits that cause the body to “Stop listening” to insulin?

1. If your body has become “resistant” to insulin, do you really think that giving it more insulin is a long-term solution? This is the traditional medical approach, and it will lower blood sugar temporarily. Ultimately it Fails. and Causes:

2. The traditional medical approach of insulin (or medications such as glucophage/ metformin, which increase insulin production in the pancreas), fail to address the four other organs/ glands that need to work in order to maintain normal blood glucose.

Failure to fix any dysfunction of these four other key organs/ glands is why dietary changes alone are not enough.

With a “Functional” metabolic approach, utilizing Advanced lab testing we can determine exactly how the 5 key organ/ gland systems are working, we’ve been able to help many people much more effectively manage their diabetes in a drug- free manor!

We’ve also been more able to help many people who have pre- diabetes (“metabolic syndrome” or syndrome x”) stop the vicious cycle which leads to diabetes.